Physical access control systems can be configured in several different ways and can have a number of different components.

However, the main goal is always the same: to increase safety and security at a site.

Most people are familiar with the basic idea of access control, but oftentimes an access control system is viewed as just another way to lock doors.

After all, that's what they're supposed to do, right?Just let some people in, and keep other people out?

Aside from managing access to doors, an access control system is able to enhance security at your site in a number of ways.

You can say one thing about standard keys: they're pretty simple. They haven't changed much over the years. Same metal, same grooves, same size. 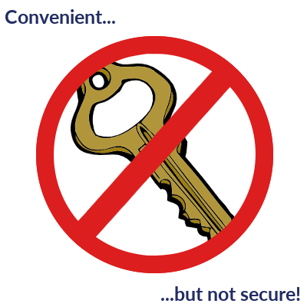 That simplicity is one of the reasons people still use them for building or room access. They're also easy to issue, familiar and cheap.

However, that simplicity also means keys can be a vulnerability in your security system, as they can be easily duplicated by anyone with a couple bucks and access to a hardware store.

Using keys for access to your facilities, be it access at the front door or access to certain areas, simply isn't good enough when it comes to security.

If a careless employee loses his or her key, all of a sudden you're faced with a tough decision: change your locks and issue new keys to all employees (which would be expensive), or run the risk of someone with bad intentions finding your key.

By swapping keys for an access control system that uses proximity cards or smart cards, your risk for unauthorized duplication will be minimal.

While it's true that such credentials can be cloned in some cases, to do so requires a wealth of technical knowledge and some expensive equipment; your average thief isn't going to have any idea how to duplicate your smart employee badges, but he or she will know how to get a key copied.

By installing an access control system that uses credentials instead of keys, you can greatly minimize the risks that come with unauthorized duplication, increasing security across your site.

Using an access control system with credentials instead of physical keys offers another benefit as well: you maintain absolute control over all aspects of your access program.

Again, consider the key example above. If you have an employee who is terminated and leaves without turning in his or her keys, that's a security risk. The employee could sell the key to nefarious characters or could come back and use it to do harm to your facility.

With an access control system, such concerns are eased by the use of cardholder management tools.

The administrator of an access control system maintains complete control over all cardholder records. He or she is able to see things like the number of active cards and when the cards were last used (more on that further down the list).

The administrator is also able to quickly and simply revoke access by specific cardholders. If an employee leaves your company, all you have to do is find the employee's cardholder record in your system and deactivate with a simple click.

In that case, even if the employee comes back, his or her card won't be recognized by the system, making sure that the employee you wanted out stays out.

3. Surveillance video can be combined with door actions for better visibility.

Access control and security systems are meant to be deterrents, preventing issues from occurring in the first place by keeping people out. However, they do occasionally need to be used during or after an event. 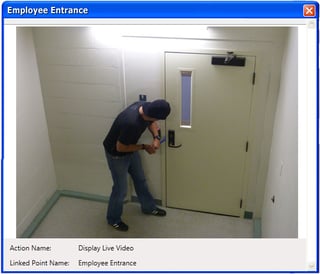 If you have a standard door and alarm system, you'll know when someone breaches a door that's not supposed to be open: your alarm will go off and your panel will likely tell you which door triggered the alarm.

You run down there to check it out, and whoever opened your door is gone. You're left to wonder who it was, or hope that the security cameras you have around your facility caught a glimpse of the perpetrator.

However, with an access control system, you can integrate your surveillance cameras with your door locks, creating a seamless and secure experience.

An access control system like PremiSys, our own brand of access control software, is able to show integrated surveillance video on-screen if a certain "event" (like a specific door being opened) is triggered. The system can also record video when a door is opened, storing it for later use.

Picture the above scenario again: thanks to your access control system, you now have a clear video of the perpetrator opening the door, making it more likely that he or she is able to be found by the authorities.

Instead of looking at one set of monitors for your cameras and another set for your doors, you have everything you need to acknowledge, dismiss or report events, right on a single screen.

4. Know who accessed your doors when, and where they went next.

For a security director, one of the more stressful parts of running a facility is not really knowing who's coming and going. Sure, you've limited keys to authorized personnel only; however, you'll never really know who opened what door with that key.

With an access control system paired with access credentials, the administrator is able to track a wealth of cardholder data that gives tremendous insight into who's doing what at a facility.

Your access control system will be able to tell you:

By using an access control system, you take the guesswork out of facility security. You know who, what, when and where, allowing you to keep a closer eye on all aspects of your site.

5. Lock down your entire facility — instantly.

As was stated above, access control systems are usually used as deterrents, but also may have to be used in reaction to an event. 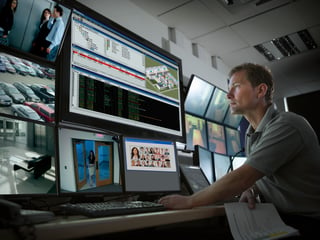 Think about this: if there's an emergency at your site that requires a complete lock down, how long would it take your staff to secure all outside doors? What about both inside and outside doors?

If you're using traditional locks and keys, the answer is at least several minutes. And in an emergency, seconds and minutes matter.

By using an access control system, you're able to manage all aspects of your site from a central location. This means that specific doors can be locked or unlocked remotely as necessary (e.g. locking a specific conference room while repairs are being performed).

Many access control systems also offer lock down options, enabling the administrator to completely lock down a facility with just a couple of clicks. Because the locks are electronic, they can be disabled remotely using your access control software, eliminating the need to rush around and manually lock doors.

Thanks to your access control system, your facility can be secured against both outside and inside threats in just seconds, not minutes, increasing safety for all personnel on-site.

Now that you've learned how a physical access control system will benefit your site, the real work begins: finding the perfect system for you! IDenticard offers a number of different access control systems, each of which can be custom-tailored to meet the unique needs of our site.

To get started, view our Access Control web offering, or use the button below to get in touch with one of our solutions specialists.