What is HL7 & Why Is It Important for Healthcare Visitor Management?

Like most heavily regulated bodies, the healthcare industry is full of important acronyms.

Many of these acronyms are terms most people will be familiar with, like HIPAA, RN, CNA and HMO. Those are healthcare acronyms the majority of people have encountered at one point or another.

However, one of the more important healthcare acronyms is one that the average patient or hospital visitor has probably never heard before:

If you're thinking "what the heck is that?", you're not alone.

Unless you work for a hospital in some sort of administrative, IT or security capacity, chances are you've never encountered the term.

However, HL7 is something that is key to nearly every healthcare facility, and plays a particularly important role in healthcare Visitor Management. 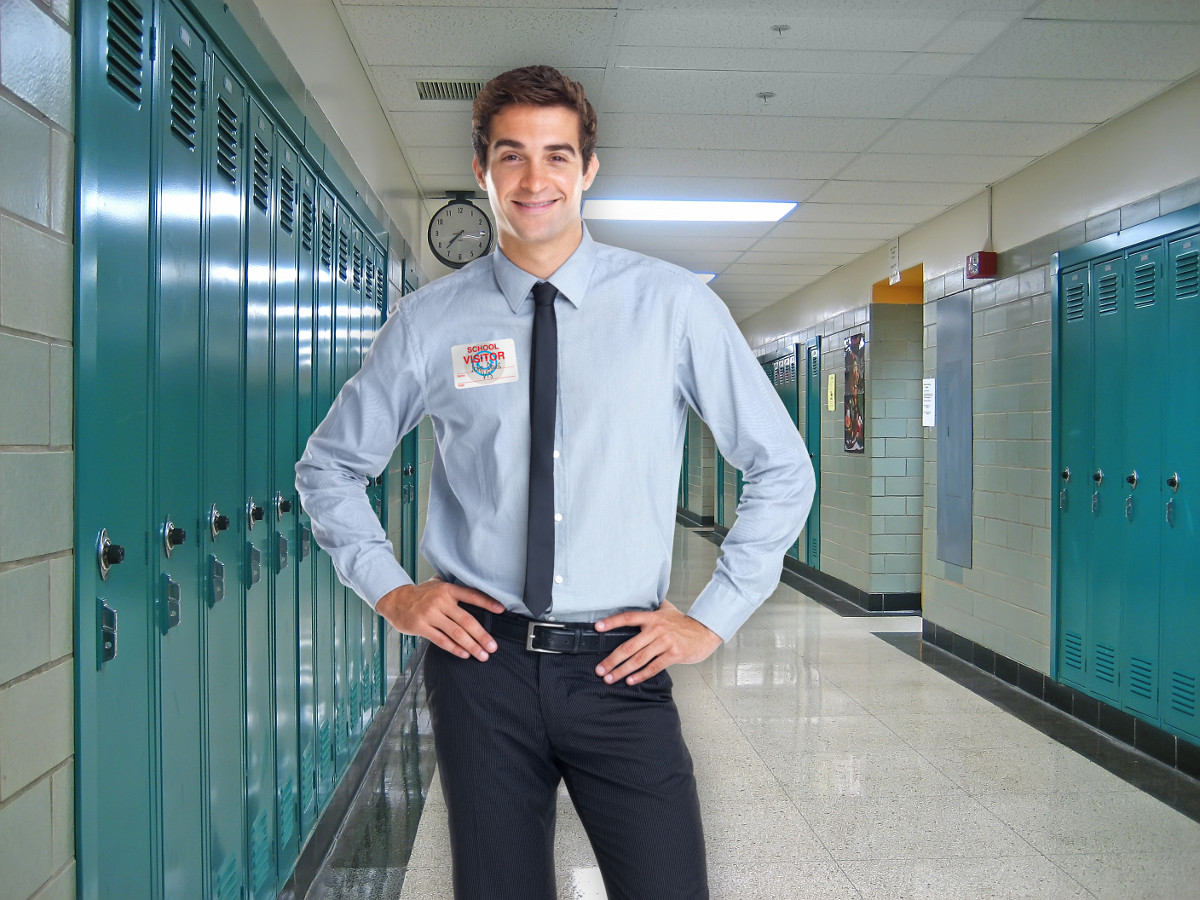 Schools around the world continue to face both internal and external threats to the safety of students and staff. Unfortunately, the daily news seems to be filled with school security incidents, from intruders to violence.

With these threats in mind, school security has never been more important. For that reason, using a simple sign-in sheet is no longer sufficient for protecting school students and staff.

When It Comes to Hospital Visitor Management, Watch Lists Are Essential 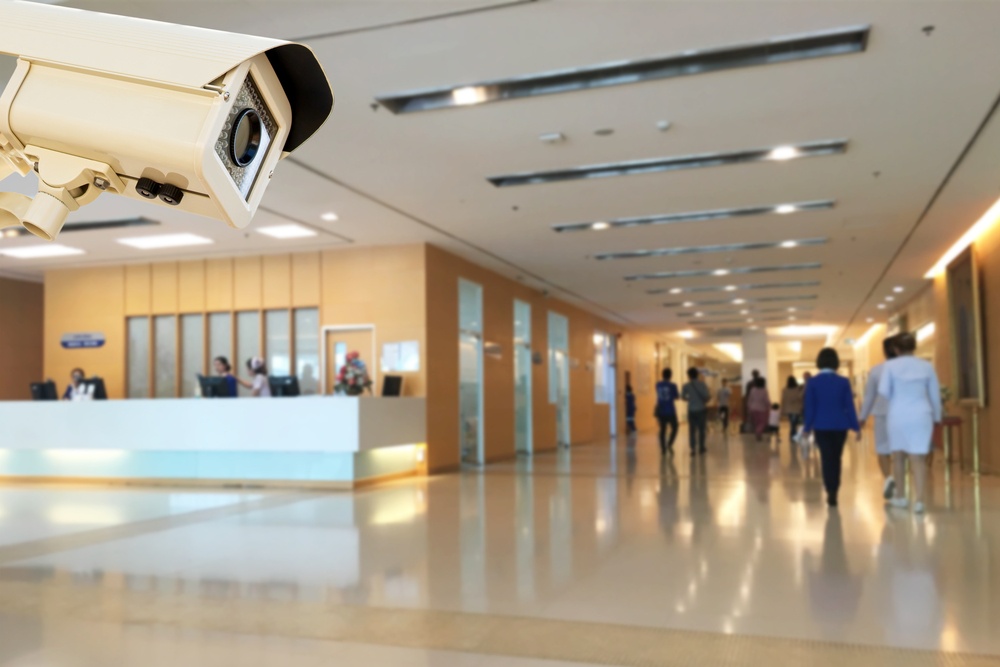 One of the main goals of any hospital is to keep the people inside, whether they're staff, patients or visitors, safe from harm.

While this goal isn't limited to hospitals (factories, schools, office buildings and other sites all want to keep their personnel safe too), safety and security are taken particularly seriously at healthcare facilities.

It may be because of the vulnerability of the people receiving treatment inside, or due to the desire to ensure that people wracked by anxiety over a loved one's condition don't have anything else to worry about.

It's obvious, but a security director or hospital administrator would be able to sleep a lot more soundly if he or she knew the facility was doing everything it could to keep potential threats from ever accessing the building.

This, of course, seems obvious: if you keep nefarious characters outside, you drastically decrease the likelihood of those characters harming anyone at your facility.

The problem is that it's difficult to identify troublemakers before they come inside, right?

Watch lists serve as a first line of defense

5 Myths About Visitor Management (and the Truth Behind All 5) 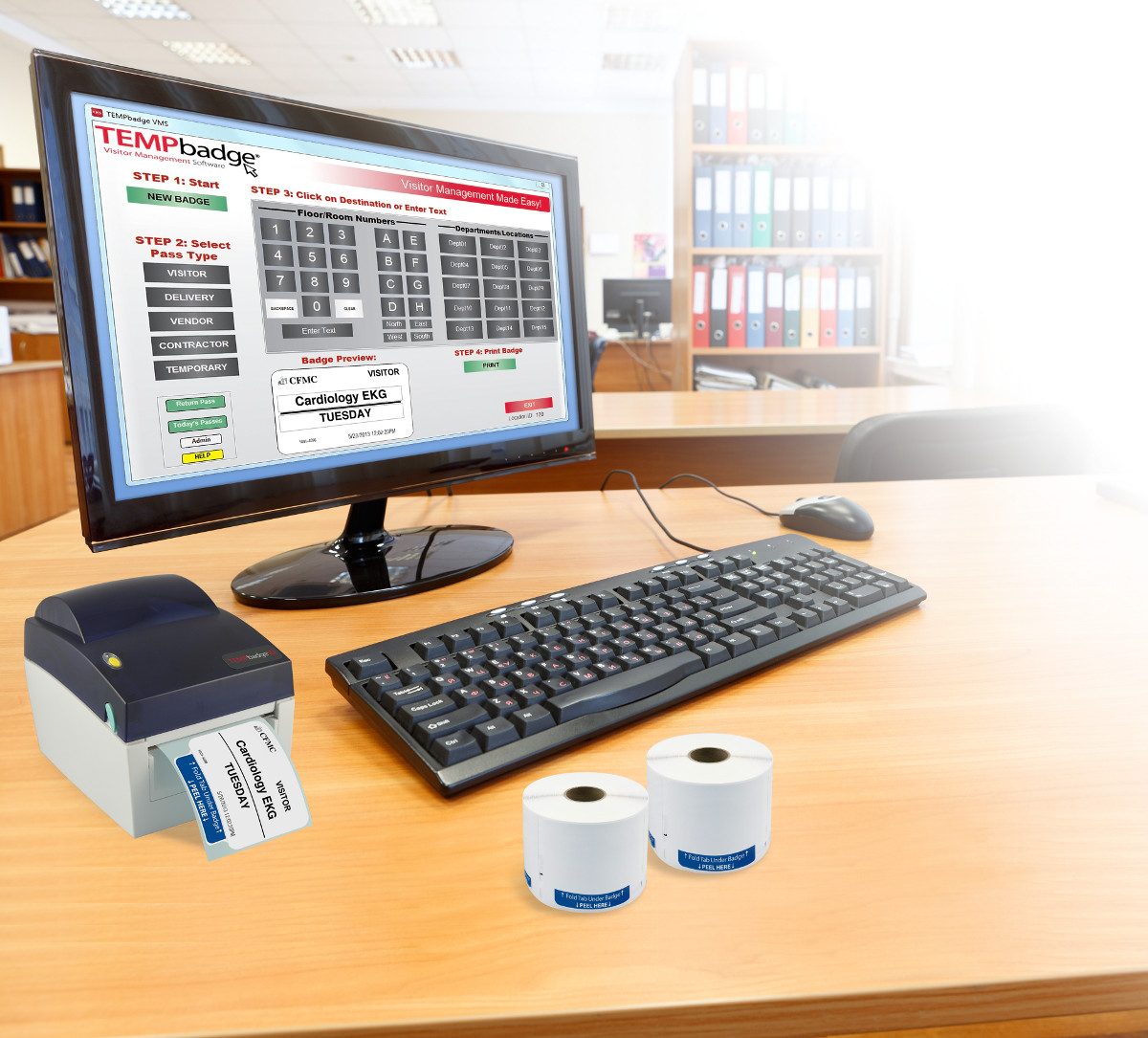 Visitor Management is a hot topic in today's security-focused climate.

Unfortunately, incidents continue to occur that force organizations to take a look at their Visitor Management and security procedures and wonder, "are we doing enough?"

Inspired by recent events, many organizations have started to look at implementing a Visitor Management program for the first time.

In talking to our customers, we've found that there's a lot of misinformation out there when it comes to Visitor Management.

In the interest of helping to clarify the murky Visitor Management waters, we've compiled the five "myths" we hear the most and provided you with the truth behind each.

What Do Cal/OSHA's Proposed Standards Mean for Healthcare Visitor Management? 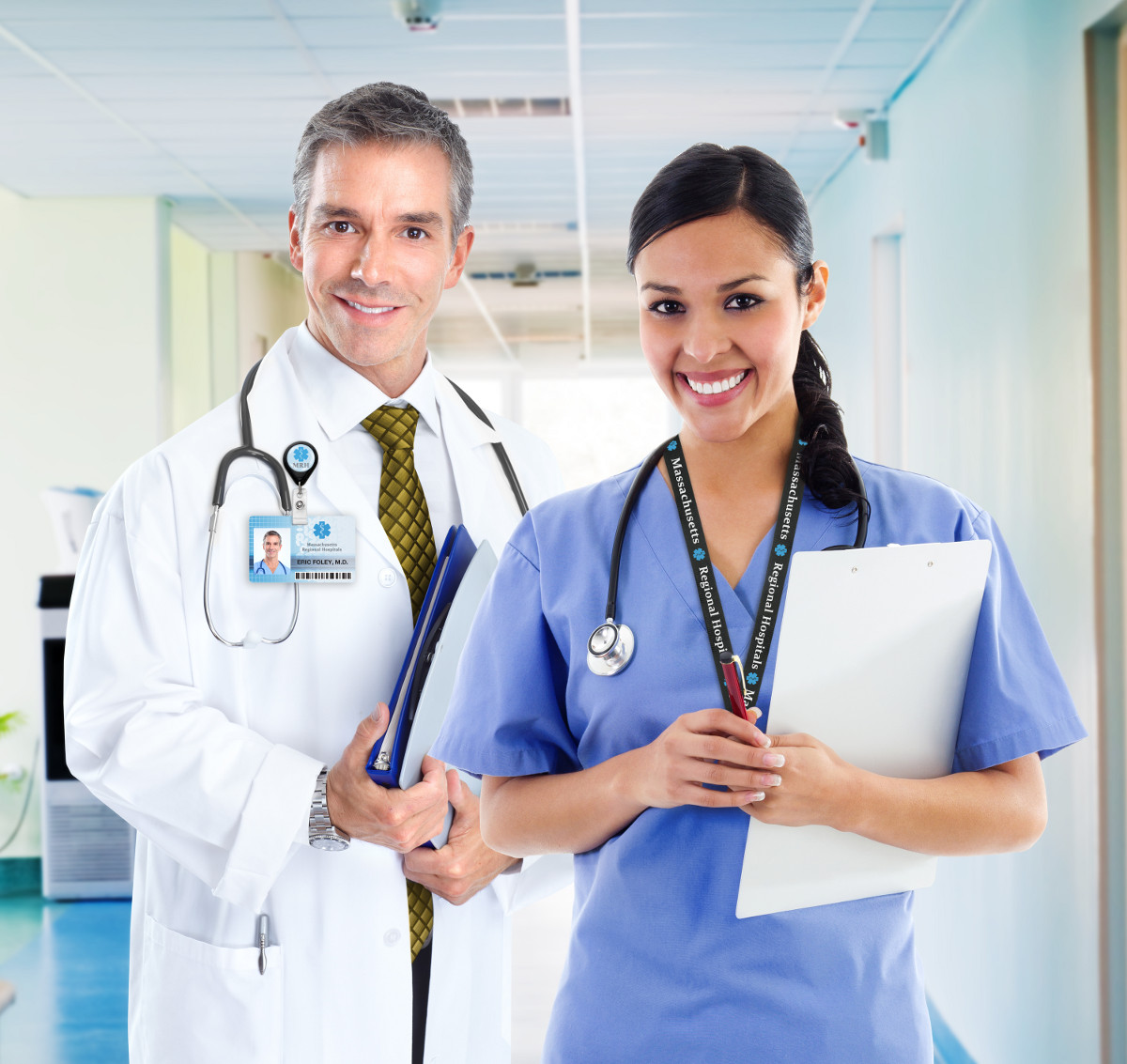 Let's be honest: the East Coast of the United States tends to think of itself as a leader and a trendsetter.

After all, the East Coast is at work before the West Coast even wakes up.

The East Coast has leading cities in areas like finance and fashion (New York City), education and healthcare (Boston) and government (Washington, D.C.).

However, there's a state on the West Coast that tends to start plenty of trends that head from west to east.

A state that features influential hotbeds like Hollywood, Silicon Valley and the Bay Area: California.

Most people know California to be a trendsetter in areas like entertainment and technology. However, California also tends to be a bellwether state when it comes to laws, rules and regulations.

There's a common line of thinking in certain industries: if something passes in California, don't be surprised if it eventually starts to filter across the country.

This tends to be particularly true with healthcare, where rules and regulations that are put into place in California often get mimicked by other states across the country.

For that reason, it's always worth keeping an eye on what's going on out in the Golden State, and the latest developments are pretty big:

California is taking huge steps towards reducing healthcare workplace violence, and the rest of the country should be paying attention.

OSHA and California's unions are working together to increase safety

OSHA Healthcare Guidelines: What Do They Mean for Your Facility? 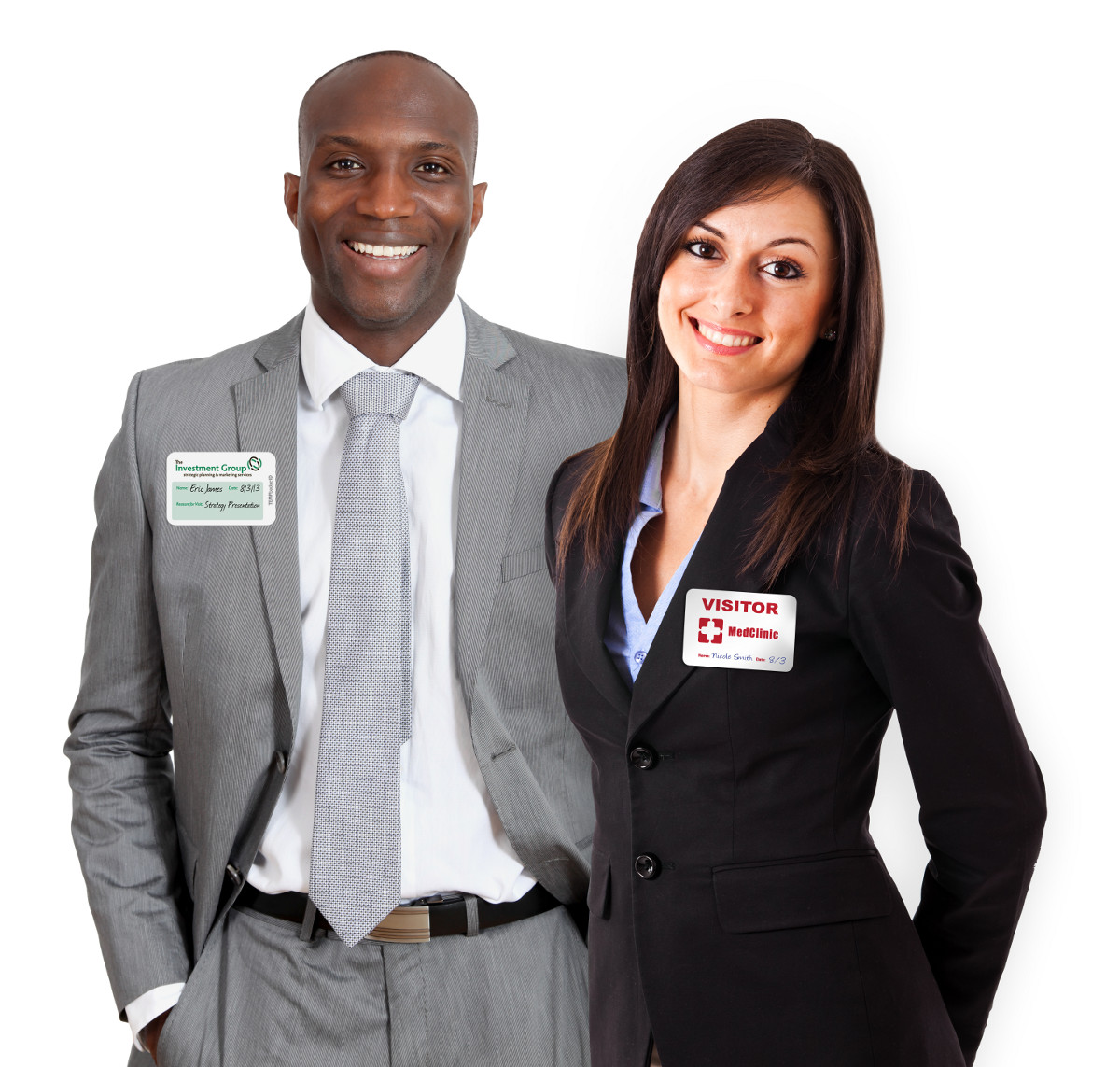 The United States Occupational Safety and Health Administration, more commonly known as OSHA, was formed in 1970 to protect workers by helping to limit violence and death in the workplace. OSHA enacts a number of rules designed to ensure safety for all American workers, from factories to retail stores.

Healthcare is a particular area of focus for OSHA. By nature, healthcare facilities, including hospitals, nursing homes and private practices, present security difficulties: a large number of people come and go on a daily basis, patient stress can lead to frequent confrontations and staff members are so focused on patient care that security can be an afterthought.

However, statistics show OSHA is right to focus on healthcare. According to statistics obtained by the Bureau of Labor Statistics and National Crime Victimization Survey and listed in an April 2015 OSHA report, healthcare workers can have up to a 20% higher rate of workplace violence than all other workers.

Violence against healthcare workers cannot be accepted as "part of the job." In that report last April, OSHA laid out several updated guidelines on various steps facilities should be taking to help protect their employees. These guidelines include, but aren't limited to, programs designed to process and track guests.

What are the safety problems facing healthcare workers?